Skip to Newest Articles Skip to Search About Us Skip to simple menu
DrJohnFalkenrothBlog.com

Archive for the 'Advanced' Category

The sciatic nerve is a nerve that begins in the lower back and travels through the buttock and into the leg and then into the foot. It is the longest and widest nerve in the human body. The sciatic nerve is made up of five lumbosacral nerve roots, L4, L5, S1, S2, and S3. When [..]

Whiplash injuries are often associated with car accidents and concussions are typically connected with sports collisions, but there’s a growing body of research suggesting that patients should be screened for both conditions following either type of incident. In one study, researchers measured the forces applied on the brain both as it impacted the headrest during [..]

Discussion A disease is not a thing, but rather a process. A disease has a beginning, a middle, and an end. A treatment intervention that is given in the middle of a disease process may be blamed for causing the disease itself. This is called protopathic bias. Protopathic Bias is when a treatment for the [..]

The Potential Benefits of Spinal Manipulation for thoseSuffering the Symptoms of Concussion and the Post-Concussion Syndrome Mild traumatic brain injuries are also known as concussions. It is estimated that these injuries have a prevalence of 3.8 million per year in the United States (1). In the majority of patients sustaining a concussion, symptoms resolve within [..]

LEGITIMIZING BACKGROUND The United States National Library of Medicine (NLM) is operated by the United States federal government, and is the world’s largest medical library. It is located in Bethesda, Maryland. The NLM is part of the National Institutes of Health (NIH), U.S. Department of Health and Human Services. NLM started in 1836 as a small collection [..]

The Joints of Hubert von Luschka A Unique Chiropractic Perspective The spot where two bones come together is called a joint. Some joints do not allow for much motion, like the joints between the various bones of the skull. Other joints allow for smooth movement between the adjacent bones. These joints are called synovial joints. [..]

Spinal manipulation is one of the most ancient forms of treatment for musculoskeletal complaints, primarily for back pain and neck pain. In 1992, Robert Anderson, MD, PhD, DC, was the Director of Manual Medicine at the San Francisco Spine Institute, as well as Professor of Anthropology at Mills College in Oakland, California. At that time [..] 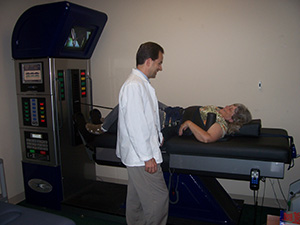